Located in a rapidly growing metropolitan area, the charity reclaims over 31 million pounds of consumer goods per year.  Sorted clothing and other goods are worth 5-10 times more than unsorted material.   Sorted material, also sold in the organization’s thrift stores, provides affordable goods to the community and creates jobs.  The proceeds pay for career development programs for 15,000 at risk youth and 10,000 adults.  In addition, they provide employment programs for the disabled.

During a downturn, volumes fall, making it difficult to support overhead and other programs.  In 2015, the growing economy wasn’t much better.  A tightening labor market made hiring difficult.  Minimum wage increases and the requirements of the Affordable Care Act made operations even more expensive. This severely limited our client’s sorting capacity and its ability to process the growing influx of donations profitably.   Processing costs were increasing, storage requirements and costs were going up and the organization’s ability to continue to serve its community was in doubt.

Clothing and other goods collected for re-use vary widely in quantity, quality and mix from day to day and season to season.  An added challenge: what appears to be a man’s shirt might actually be something else. Once identified, the article must also be inspected for condition.  This drives up the time for each pick and increases the risk of a “miss-pick” – where the sorter selects an item, only to reject because it isn’t what she thought or because it is too damaged to use.

In 2016, the organization installed a $250,000 sorting system in the warehouse where they stored collected consumer goods.  The system included a Revolution© sorting system, a carton tipper,  a metering conveyor and a feed conveyor.

The Revolution’s flexible design allowed the team to arrange the chutes so that the alternate choices for an item were within easy reach of the sorter.  Multi-pass capability gave each operator the time they needed to identify and evaluate each item.  Once picked and evaluated, the material went directly to the bin or container, ready for the outlet floor or shipment to the broker. After an initial 3 week shakeout, production ramped up as the teams and managers learned more about the system and learned to work together.   The teams learned how to adjust the feed rates of material on the metering and feed conveyor to provide a consistent presentation of material to the sorters.  Encouraged by the “one touch” approach, they found additional opportunities to reduce handling downstream of the Revolution.

After eight months, production doubled, cutting production costs in half.   This effectively doubled the organization’s capacity in a tight labor market, increasing revenue from sorted material by $200,000 per month. This also reduced the amount of space required to store material before processing, saving rent on additional space by $40,000.    Besides reversing the cost increases, the organization was able to better fund the rest of its programs and better serve the community.

Important, but hard to quantify are the team impacts of the new system.  Absenteeism decreased. Compounding that, the impacts on production of absenteeism also decreased.  Team members showed up for work with their teams AND when short handed, pulled together to hit their goals.

Since startup, production continued to improve.  Instead of all sorted material dropping directly into gaylord containers for storage and shipment, some grades are instead placed directly in the bins used for sale and taken directly to the sales floor.

Scrap material is normally placed in a gaylord container, stored, and then tipped onto a conveyor for feeding into a baler before sale as rags to various industrial customers.   The organization considered feeding this material directly into a baler, skipping the container, the storage and subsequent handling.

Faced with increasing costs and labor market restrictions,  thrift stores and other used clothing processors can respond with a solution that increases productivity AND improves working conditions to better fulfill their mission of service to their community. 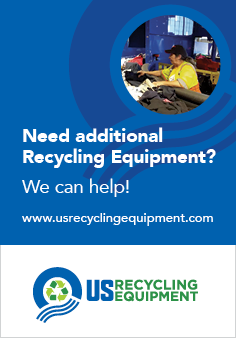